Beacons of the Night

With the solar eclipse around the corner next week, I thought I’d share another celestial event that I managed to capture…last year’s Supermoon, which was the moon’s closest encounter with Earth since January 26th, 1948. That’s over 68 years in the making, with the next closest encounter happening again on November 25, 2034! With those bits of statistics, and even though I haven’t had much experience shooting night photography, I thought to myself that it would be a good time to try my hand at capturing some astrological magic. Given that experience was not on my side, I found it comforting that I’d have two cracks at catching the phenomena, once in the early am, and once at night fall. With the sky looking relatively clear the night before, I plotted my plan of attack and chose a good location where I thought I could catch the moon setting, with a decent landscape that would help show the scale of the Supermoon best. Being relatively new to Victoria, I thought I couldn’t go wrong with the lighthouse and pier at Ogden Point. With some tips I picked off the interweb, and the weather looking clear and gear raring to go, I set my alarm for the ungodly hour of 5am! Well as you can imaging, it didn’t take long for the alarm to go off, but with the excitement of possibly capturing something special racing through my veins, I sprung out of bed like a jack knife and raced towards the Pacific. Getting closer to town, the skies where still practically clear and I thought the chances of capturing something magnificent was looking rather good. When I finally parked close to the pier, I saw one other photographer out with the same idea as me. With that, I thought befriending the photographer would be a good way of getting some last minute tips, as well as working together so we didn’t get in one another’s line of view as the pier is only about 10 ft wide. We finally agreed upon the right area to shoot from and started taking some test snaps to help maximize our chances of capturing the moon as it neared the horizon. And then we waited. And waited. In that time I learned more about the other photographer, whose day job was carpentry. Early morning’s seemed to be his thing as that’s when he could escape his daily responsibilities momentarily, before his kids were up and needing some fatherly attention. After some chit-chat, we realized the low lying cloud cover would keep us from seeing the moon at its greatest size (which is actually an optical illusion the closer it gets to the earth’s horizon) so we had to make do with the conditions we still had. And with that, we have this photo I captured last November. Not a typical Supermoon by any means, but still quite eerie, with the moon looking more like the sun on a very dark and mysterious day. And with not capturing the expected, I say the shot is still a keeper. After the shot and after the moon setting behind the clouds, we packed up our gear and walked back to our cars wishing the other good luck for the moon rise happening later that evening. Unfortunately, we never got a second chance with the sky getting completely covered for the remaining part of the day and evening. Better luck next time? Well, maybe I’ll have a clearer night, and maybe some even fancier lenses in 2034 😉

Update: This shot was recently featured in WestJet Magazine! 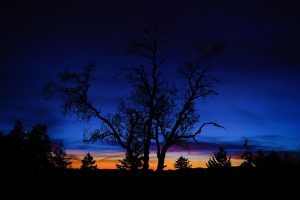 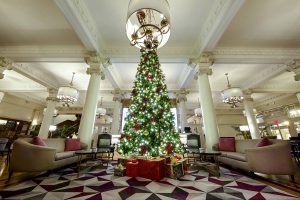